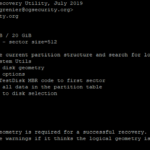 TestDisk is a free and opensource, command-line data recovery tool that is used to recover data from deleted or lost partitions. Further, you can use it to revive non-bootable partitions which can be caused by factors such as accidental deletion of partition tables, and malware attacks to mention a few. The command-line software was written
Read More

If you would like to backup your hard disk, there is a simple way to do it by using “dd” command. The dd command utility is used to copy files or disk images from one location to another. Using dd, you can backup an unmounted disk as a (compressed) disk image which is then stored
Read More

Ncdu (NCurses Disk Usage)  is a command line tool to view and analyse disk space usage on linux. It can drill down into directories and report space used by individual directories. This way it is very easy to track down space consuming files/directories. It actually allows the user to do this much faster than even a
Read More